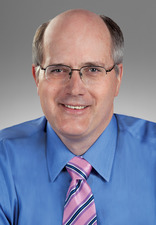 the University of South Dakota Sanford School of Medicine, has been named the recipient of the Karl H. Wegner, MD, Chair in Medicine. It is a three-year appointment.

A native of Wall, South Dakota, Hansen is the chair of the Department of Obstetrics and Gynecology at the medical school. He received his medical training at Washington University in St. Louis, Missouri and subsequently practiced and held faculty appointments at medical institutions in Virginia, Georgia, Maryland and Washington, DC.  In 1998, he returned to South Dakota to practice medicine and teach at the USDSM in Sioux Falls. Dr. Hansen has served in a variety of significant roles at the medical center, including his current role as chair of the OB/GYN department.

The endowment to create the Karl H. Wegner, MD, Chair in Medicine was established by the late Dr. Karl H. Wegner with the support of his wife, Margaret Cash Wegner. Karl Wegner began teaching at the medical school in 1962 and served as dean from 1974 to 1980. He also served as chief of pathology at Sioux Valley Hospital, now Sanford Health.  Dr. Wegner died in April, 2014.