An individual who began his health care business career at  Rapid City Regional Hospital (RCRH) as an Administrative Fellow in 2000, rose through the ranks through 2008, has returned with a 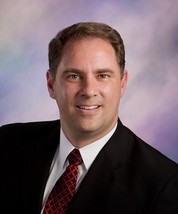 wealth of experience which has garnered him the position of Chief Operating Officer at the hospital.

Michael “Mick” Gibbs, Fellow of the American College of Healthcare Executive (FACHE), comes to RCRH from Sanford Health in Fargo, N.D., where he was the Vice President for the Heart, Vascular, Surgery and Radiology programs since 2010. He also served as their Vice President of Clinic Operations from 2008-2010

Prior to working for Sanford Health, Gibbs was employed by Regional Health for eight years. He began an Administrative Fellow, was promoted to the Director of Customer service for RCRH, moved up to the position of CEO at Gordon Memorial Hospital in Gordon, Neb., and then served as the Vice President of Professional Services at RCRH.